Michael was born in Warsaw, Poland and spent his youth there. He and his parents immigrated to Canada when he was nine. After a five year stay in Niagara Falls, they moved to Guatemala for two years where he experienced firsthand Hispanic and Mayan cultures which later sparked his interest in Spanish literature when he was in university.

In addition to his full-time position with Athabasca, Michael taught a variety of first, second and third year Spanish courses at the University of British Columbia, Mount Royal College, Red Deer College and most recently at the University of Calgary. His teaching experience is complemented by over 10 years as an IT manager and instructional technology specialist

Since 2003 he has been creating collaborative learning environments for developing foreign language writing skills in his composition courses at the University of Calgary and hopes to bring this experience to on-line learning. He is also developing an open educational resource library of student created materials for use in language instruction at the secondary and post-secondary level.

“Cinema from the Border, Cinema as Border: Creation, Subversion, and Deconstruction of Latino Stereotypes in Border Crossing Films.” as final project for MAIS 700, December 2013.

Blessed by his proximity to the Rocky Mountains, he can regularly be found hiking during the summer and skiing during the winter, usually with a camera in hand to capture images of beauty.

“A Call to Practice What We Preach.” Rev. of Restoring Free Speech and Liberty on Campus by Donald Alexander Downs. Canadian Association of University Teachers Bulletin. 8 May 2009.

“Learning as Teaching: Engaging Students through Collaborative Publishing.” International Society for the Scholarship of Teaching and Learning, Edmonton, AB. 18 October 2008.

“Virtual Language and Virtual Culture: The Next Best Thing to Being There.” Internet Society Conference INET ’96: Montreal, PQ.

“Instructional Technology and The Information Highway: Are Students Getting On, Sidestepping or Getting Run Over?” - AMTEC ’96: Vancouver, BC. 3 June 1996. 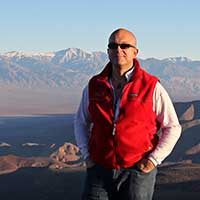